It’s a fairly commonly-held belief that house prices double every 10 years. Is it correct? Can it be guaranteed? And is there fact to back up the assertion? In researching this question, I found that asking the question on Google “Do house prices double every 10 years” provides a pretty comprehensive pedigree of search results, 339 million to be exact!

Before diving into the NZ data, it is worth reminding ourselves of the mathematical fact that for a sum of money to double in 10 years requires an annual compound interest factor of just over 7%.

So what about Auckland, the leading metropolitan region of the country?  Most of the media portray the Auckland market as constantly bubbling and among the most expensive cities to live in. What does the data show? 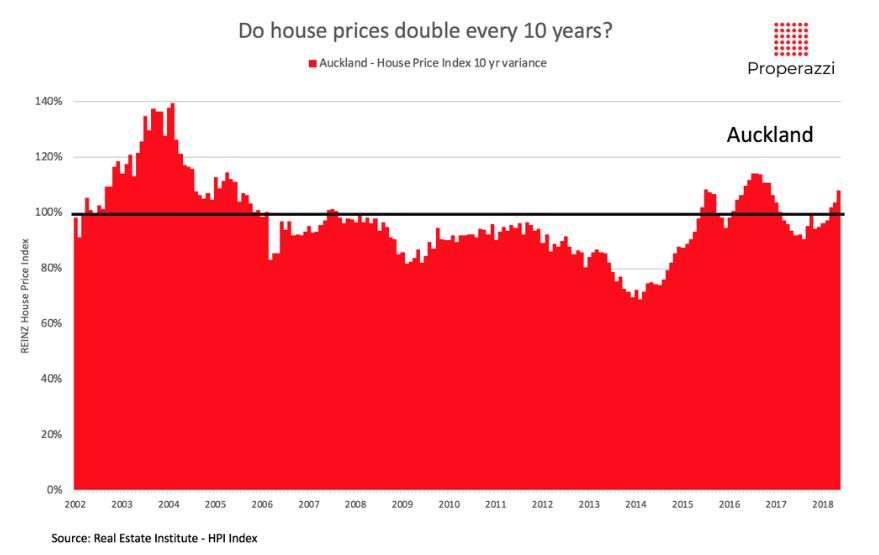 The black horizontal bar shows the 100% increase threshold. This chart is certainly illuminating and somewhat surprising. Compared to all of NZ, Auckland has sustained a relatively consistent higher 10 year growth in prices with an average 10 year growth of 98%, well ahead of the NZ total at 88%. However the periods during which a doubling was seen were fewer and not aligned to those of total NZ.  In just 72 of the 198 months was a 10 year doubling witnessed – less than the 85 for total NZ and the highest 10 year rises where in early years of the new millennium and the recent boom cycle.

So can it be said that property prices double every 10 years?  Clearly not; as to make such a statement is always assuming the past is the best indicator of the future which we all know is wrong. However it would be true to state that in the case of Auckland that over the past 20 years property prices have pretty much consistently doubled every 10 years as the median 10 year rise is 96%.

The above is extracted by an article by Alistair Helm in Property data NZ,

The full article can be read at properazzi.co.nz