Spring sprouts into action with highest number of sales in 5 months, says REINZ 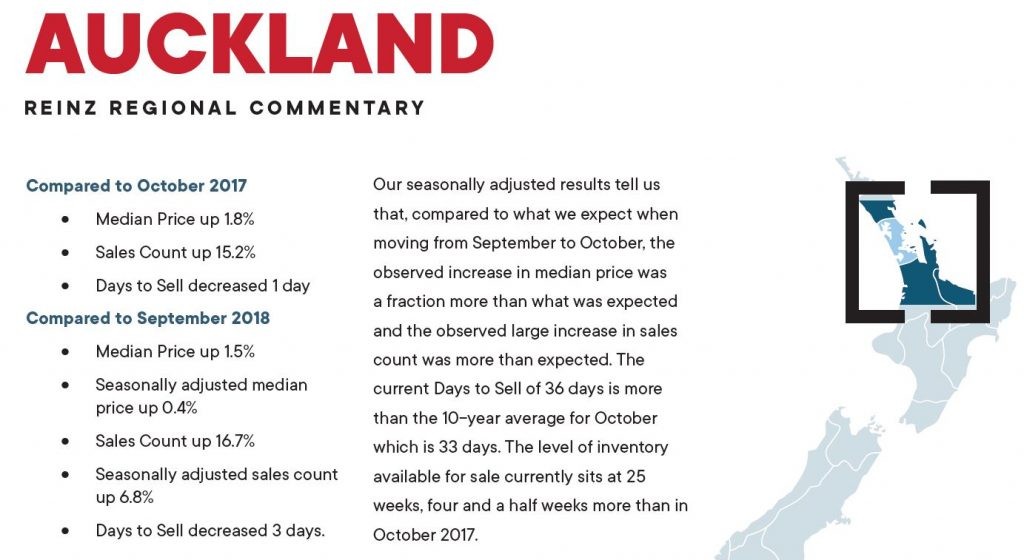 Excerpts from the October report by the Real Estate Institute of New Zealand (REINZ).

The Auckland market had a more upbeat feel during October due to a significant increase in listings (+20%), including new developments in key residential suburbs.  Days to sell also decreased by three days year-on-year and the median price was at its highest point in seven months – showing signs of a positive market.   The number of properties sold increased by 15.2% or 257 more properties, from 1,691 in October 2017 to 1,948 in October 2018.

September was very quiet in terms of the number of properties sold and we predicted that with the increase in listings coming to the market that October’s sales would be much stronger than September’s. With strong sales this month, it’s our belief that New Zealand is taking a different path to what we’re seeing across the Tasman at this point in time.

October also saw the introduction of the foreign buyer ban and while there have been pockets around the country of people talking about a rush ahead of the ban,  Statistics New Zealand’s September quarter figures show the lowest level of foreign buyers since they began keeping records.  “We’re confident that most of October’s lift in volume is attributable to the spring lift rather than a rush of foreign buyers looking to get in ahead of the ban,” says REINZ CEO Bindi Norwell.

“The constraint on supply has continued to drive up house prices across much of the country with record prices achieved for New Zealand, New Zealand excluding Auckland and five different regions. Until we seriously address the fundamental housing supply issues, record price increases are something that we’re going to continue to see around the country – particularly as Aucklanders continue to move out of the city for both lifestyle and affordability reasons,” says Norwell.

“October also saw Auckland’s median price rise by 1.8% to $865,000 – the highest median price for 7 months. It’s too early to say if this is the start of the next price increases for Auckland, but traditionally we do tend to see increases in October and November as we move into the warmer weather,” continues Norwell.